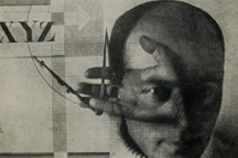 How does photography reproduce and represent the world? New Vision and Neue Sachlichkeit’s documents.

Foto-auge, œil et photo, photo eye was one of two books published to accompany the legendary exhibition Film und Foto organized in 1929 by the Deutscher Werkbund in Stuttgart. Edited by photography critic Franz Roh and designed by Jan Tschichold, whose sober Bauhaus typography put the entire text in the lower case, this book catalogued the European avant-garde’s position with regard to photography and featured photographs, most of which turned to the metropolis and industrial sites as places worthy of aesthetic scrutiny, by a variety of artists, including Eugène Atget, Herbert Bayer, Max Burchartz, Max Ernst, Lionel Feiniger, E.L.T. Mesens Man Ray, Maurice Tabard, and Edward Weston, among others. Its cover in a 1 (and more) there is to know about the book: reproducing El Lissitzsky’s now famous photomontage, it presented the artist as a hand at the service of the eye, thus celebrating the “monocular medium” (photography). As Rosalind Krauss has rightfully remarked,1 the catalogue thereby above all echoed Bauhaus aesthetics and László Moholy-Nagy’s New Vision, which had been launched a few years earlier.

Moholy-Nagy, whose work was also represented in the catalogue, believed like many in the 1920s that photography was “one of the most important factors in the dawn of a new life,”2 since the camera expanded visual eyesight and made one see the world with different (or, as Siegfried Kracauer would later call it, indifferent3 eyes. Indeed, indifferently or objectively registering the world, not discriminating the significant and meaningful from the insignificant and meaningless, photography appeared to reproduce the world as it was. But was it really? Could photography not also be a mode of expression, of representing the world? These and other issues challenged writers at the time as well to devise new tactics for a poetic of the “literary document”. Was literature to “document” and “register” the world in similar ways? Proponents of Neue Sachlichkeit at the time certainly appeared to think so: reality could be shown through writing with more exactitude and precision than ever before, by deploying avant-garde techniques previously developed. Or was literature to seize pre-existing documents and forms reminiscent thereof to create a different world, not readily available to the eye and the visual media of photography and film?

Editor Franz Roh (1890-1965), who was thought to be progressive, was briefly imprisoned and forbidden to write by German officials in the 1930s. Indeed, the national-socialist government, in devising its propaganda, would ultimately fail to settle this debate: with as much precision as possible, it tried to evoke a world that never existed.