Marcel Proust and the medicine of the Belle Epoque 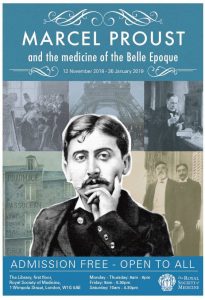 La bibliothèque de la Royal society of medicine consacre une exposition aux relations entre Proust et à la médecine de son temps, dont voici la présentation sur son site : « The novelist and essayist Marcel Proust was the author of possibly the greatest work of twentieth-century fiction, A la Recherche du Temps Perdu (In Search of Lost Time), a work that fairly bristles with medical references, metaphors, and doctors who possess varying degrees of ability. Proust’s life (1871-1922) spans almost the whole of the Belle Époque period (1870-1914), a time when profound new scientific and philosophical theories were challenging the very foundations and forcing a re-appraisal of human knowledge, theories and exploration the like of which had never been seen before.

The exhibition is drawn from the collection of the RSM Library and includes works by members of Proust’s family (his father and brother were both distinguished doctors) and by some of the leading French physicians of the day many of whom are depicted in fictional guise throughout A la Recherche du Temps Perdu. »