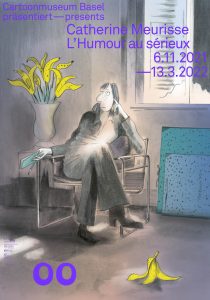 Catherine Meurisse (b. 1980) is one of today’s most famous female French comics artists. She is the author of several graphic novels and comics reportages, drew caricatures and illustrated children’s books. In the year 2020, Catherine Meurisse became the first cartoonist and caricaturist to be made a member of France’s Académie des Beaux-Arts.

The comprehensive retrospective at Cartoonmuseum Basel is the first in the German-speaking world to show original drawings from all works by this multi-award-winning artist and presents her recently released book La jeune femme et la mer (The Young Woman and the Sea).

Meurisse publishes in countless newspapers and magazines, including Libération, L’Obs and Revue XXI. She became the first female cartoonist to work at Charlie Hebdo and spent 10 years there, until narrowly escaping the 2015 attack on this satirical magazine, in which twelve people died. Since then, she has sought other themes in the nature and the arts. She has released two graphic novels with autobiographical elements: La Légèreté (Lightness) and Les Grands Espaces (The Great Outdoors). In a touching manner, Lightness describes how she fought her way through loss and grief to rebuild her life. In The Great Outdoors, she revisits her upbringing on her parents’ farm. Both books are peppered with allusions to literature and art, celebrating the power of culture.

In 2014, the comedy Olympia in Love was published, linking paintings and objects from the collection of Musée d’Orsay with a joyfully naughty story from the world of painting, dance and early film. In 2019, Catherine Meurisse managed to represent Alexandre Dumas’s memories of Eugène Delacroix in her magnificent publication Delacroix. As the result of two stays in Kyoto, she produced La jeune femme et la mer (The Young Woman and the Sea), in which she addresses her perception of the Japanese landscape, nature and way of life – which change when the island is hit by a Typhoon.